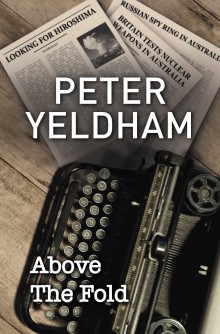 Where the headlines are …

Luke Elliott and Claudia Marsden have fallen in love at a perilous time. The Second World War is raging in the Pacific, barbed wire and gun emplacements are strung along the northern beaches in preparation for invasion. As the war moves closer, their ‘sextet’ of loyal school friends is splintering as individual career dreams are pursued. Luke yearns to be a journalist but a start in newspapers is proving challenging. The war’s end unexpectedly provides Luke’s big break, but the pursuit of his dream will keep him away from Australia and Claudia, with surprising consequences for them both.

“Peter Yeldham’s historical fiction pedigree is one of the best in the country.”

Review of ABOVE THE FOLD by Gabrielle Lord, author of Dishonour

‘Above the fold’ is a newspaper term, implying that the important news of the day is on the top of the page –‘above the fold’ in a broadsheet. Peter Yeldam’s novel of the same name could be similarly described. In this wide-ranging novel, he has delineated and examined ‘the news’ of post-war Australia. By means of a group of six friends -- ‘the sextet’ -- and their adventures, focussing particularly on the journey of young lovers Luke Elliott and Claudia Marsden, Yeldham takes the reader along for the ride.

Many of the incidents covered in Above the Fold have the ring of truth about them and so it was without surprise that I read in Peter Yeldham’s acknowledgements at the back of the novel that he had witnessed and been involved in several of them himself. The harrowing story of the little Japanese boy, Kaito, dying of radiation sickness is one I’ll never forget.

Above The Fold is a big-hearted novel that explicitly examines notions of love and loyalty, as well as describing the historical events that were so important in Australia. It also demonstrates the results of harsh parenting and how this impacts on children and then later the adults they will become. This novel will please those who are old enough to have lived through these startling events -- who said nothing happened in Australia in the ‘50’s’? -- and will inform those who aren’t.

Anyone who enjoys reading about post-war Australian history and the attitudes that informed much of it, will be delighted with Above The Fold.

Written with meticulous detail, this is an engaging story spanning a tumultuous period in Australian history.

This is a book with a big conscience, from the atomic bombs in Japan, cover ups in Australia and the appalling attitude and treatment of Aboriginal Australians. Read More

It started as a sort of romance novel and I didn't really like it, but I am glad I kept reading as it is a terrific story about Australia's recent history. Read More